I'm working my way through the newer Vogues. This time it was Vogue 1224.

Another one I loved from the get-go. But also another one that is iffy for my figure. Generally I try to shy away from elasiticized waistbands. They do nothing for me. I need sometthing that delineates my waist between under bust and hip because that's my narrowest. Yes, this pulls in at the waist but it doesn't do much because I'm so top heavy. I did want to try it though as it would be nice for a quick summer dress.

I'm not completely unhappy with it. I did a few modifications like adding an inch to the bodice and adding two inches to the hemline. I bought this cheapy fabric at Joann's, once again, Red Tag 50% off so it was bout $2 a yard. I bought it because I wanted the border to go around the hem. Well, I didn't even check it but this is only 2 way stretch and it doesn't stretch that way at all! So I got creative. It is also supposedly rayon but I'm not so sure on that.

For this version, I cut an 18 which is actually pretty close to my measurements. I don't usually cut it that big because anything over a 16 is usually huge where I don't want it to be, shoulders, back, arms, etc. I figured though with this having elastic in the waist and neckline, I could adjust it easily instead of doing and FBA. I was mostly right. The elasitc is good to adjust it. I should have cut it smaller in the shoulders anyway though. It hangs on me. I think I will add the inch to the bodice but cut the shoulders smaller. It is pretty low too. I could not find any finished measurements on the pattern either so I figured I'd go big and cut down if needed. However, it's pretty comfy and fits ok. I usually have to add to the waist in a 14 or 16 anyways.

This is very short as others have said. I'm 5 foot 3 on a tall day and I added 2 inches to the hem. It hits me above the knee but it's an ok length for me. Two inches shorter and I think it would be too short for me.

I didn't add the lining, I was making a cheapy trial run, so I just folded over the waist seam to make a casing. I like the lining idea if you were making this out of thinner fabric. I just wanted cool and easy for this one.

It's a decent pattern.

Excuse the pretty shoe...I broke my baby toe the other night pretty badly. 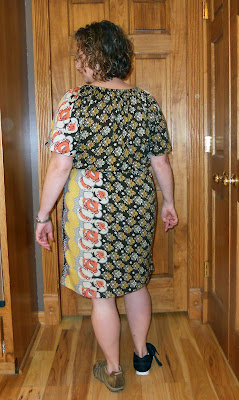 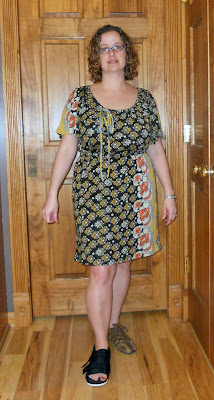 I wanted to see this dress on someone built a little more like me because lately I've been wanting it too. And I have some of the same concerns about the elasticized waist that you have...but this looks great on you. I love the print you used. It makes it fun and funky...and I understand you are going to make some minor adjustments for the next version but this one is looking good!

Thanks Carolyn! I ended up shortening the elastic by 2 inches and that seemed to help pull it up a bit more in the back. I know what you mean about seeing people built like us in things which is one of the main reasons I like to share what I make. I appreciate seeing those of all different sizes in these patterns.

I agree with Carolyn, this looks really nice on you! Very soft and airy for a casual summer dress. Sorry about your toe, but it doesn't seem to be slowing you down any!

I concur with Carolyn and Amanda! I think that even with the elastic as is you still get a great definition between your bust and waist!

I love that you turned the print! I think it makes it unique. And I'm sorry about your foot - why is it the little toes hurt the worst?

Love the way you used the border print. It's flattering and just fun. I read your post about the length iwth interest since I am 5'2". The 2-inch addition is a good length for you--looks great!

I love this dress and it looks great on you. I've been wanting to try it, I think it might give it a try.

Nice dress and colors! Pray your toe a speedily healing!

Kim
I started sewing in December 2008 and it has become a full blown addiction. My other addictions are dogs and shoes which may show up here occasionally ;-)